The importance of patience

Posted on September 8, 2015 by DogsInTranslation in Dog Training 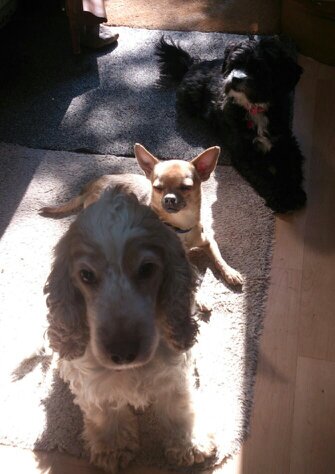 As a Dog Listener, I visit people in their homes to help them resolve problem behaviour with their dogs. I help people to understand the importance of achieving leadership in the house and garden first, before heading out into the wider – and potentially more challenging – world.

How you interact with a dog when you first meet him and then subsequently, whenever you reunite with him, is very important. This is a crucial time when the pack hierarchy is established and then consistently re-established, so that everyone always knows where they are in relationship to each other and most importantly – who is the Pack Leader!

It is often an area where people have problems, ranging from over-exuberant greetings – jumping up, barking, nipping and other attention seeking behaviour – through to the distressing and often destructive separation anxiety, that many dogs experience when their owners leave them at home.

Skip was a very handsome,  2 year old Jack Russell Terrier who hadn’t had the best start in life and at the tender age of 1 year (ish) was found wandering alone in the Norfolk countryside. Fortunately for him, a very lovely lady visited the Rescue Home that Skip had been taken to and decided to see if he would like to join her own pack.

Amongst other issues Skip was a tail chaser, a much misunderstood and not uncommon behavioural problem. Tail chasing is often seen as a dog being playful or excited but is actually associated with stress. It is one of the many ways that a dog will strive to get the attention of the humans around him and is often part of a repertoire of behaviours implemented when meeting and reuniting with people.

In his new home, Skip had joined a family of three dogs and two humans. When I arrived at the house all of the dogs went into their ‘routines’ in an attempt to gain my attention on their terms. By ignoring these attempts and calmly giving them the information – through body language and eye contact – that I was above them in status and that I wasn’t a threat, I encouraged the dogs to calm down, relax and then choose to join us on our terms.

Skip needed a little extra assistance and we calmly showed him how to ‘not’ chase his tail, without giving him attention on his terms.

Over the following weeks and months, Skip’s new owners continued to calmly and consistently convey to him that they were the Pack Leaders that he could trust. Through understanding and communication and with bucket loads of patience, they gradually gained his respect and cooperation and over time the compulsive tail chasing became a thing of the past and Skip settled happily into pack life.